News from Germany about Joeri's family

Our Joeri was bred by Rosi Bauersachs from Germany. Few days ago we received e-mail from Rosi's daughter Anne, who wrote about recent accomplishments of Joeri's siblings. Thank you Anne and congratulations!

In the last two weeks Jette and Justus at tented two tests. First they went to our Begleithundeprüfung. They completed the whole test (BHP-G: water, obedience, searching for the owner). Jette was the best dog of the day with the whole points (220 points). Justus have had 192 points and also a first prize.

Few days later they both were entered in a blood tracking test. Justus and Jette got a first prize (Justus 100 points, Jette 92 points); in addition Justus was the best of the day. Moreover, Isidor (Ilena's brother) and Joschka (Joeri's brother) passed the fox-earth-test last week.

We are proud of the teckel and their owners. 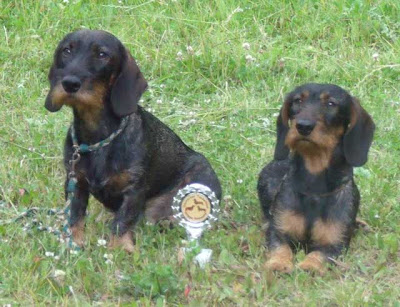 Above - Justus and Jette, Joeri's littermates

Below - Jette, Ilena and Kobolt. Jette and Kobolt are Joeri's siblings and Ilena is Joeri's dam. Kobolt comes from the 2009 litter that was a repeat breeding that produced Joeri. 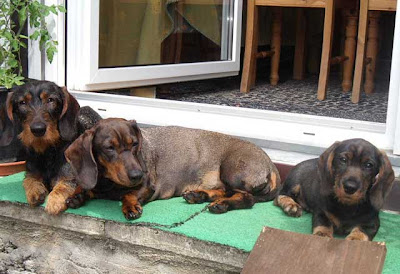 Posted by Jolanta Jeanneney at 6:26 PM No comments:

We got this e-mail from Rod Halvorsen from Idaho:

Fish and Game Department has accepted my proposal about the use of blood trailing dogs for public review.

My proposal is "Issue 6" under "Opportunity for Public Response and Comment on 2009 Proposed Rule Changes":

Feel free to vote! I hope it passes. If so, it will be effective for the 2010 season.
Rod

Please take a minute of your time and vote in support of Rod’s proposal. Forward to your friends. Thank you!
Posted by Jolanta Jeanneney at 10:18 AM No comments:

Today I received a nice e-mail from Sally M. from Vermont. Sally says:

I've been meaning to send you this picture for a long time - it's of Petey in his 4-wheeler box. In the spring, I make maple syrup but I only boil about half of my sap. The rest I bring to a farm down the road with my 4-wheeler. This year I made a box for Petey so he could come with me. He took to it immediately - he would sit down and lean against the side of the box with his nose in the air, thoroughly enjoying the ride. While I unloaded the sap, he got to run around a big hayfield full of gopher holes. He wore a harness and was hooked to the box so he couldn't jump out, plus the sap was really heavy so we had to go slowly. I felt pretty comfortable that he was safe.

Petey's doing just great. He had a good winter, only one trip to the vet for porcupine quills. He's matured beautifully, physically and mentally. I don't know the first thing about proper dachshund conformation, but I can at least see that he's strong and straight, athletic and moves well. He has a great personality too - he's calm and quiet, well-behaved, friendly and confident. Though he still tries to hump the cats, eat their poop and will roll in really disgusting things.

I am planning on bringing Petey to the UBT workshop in NH and am looking forward to it. Hopefully you'll be there and will get to see him in person. Sally

Thank you Sally, as always, it is great to hear from you. We both will be at the workshop, and I am really looking forward to seeing you and Petey. 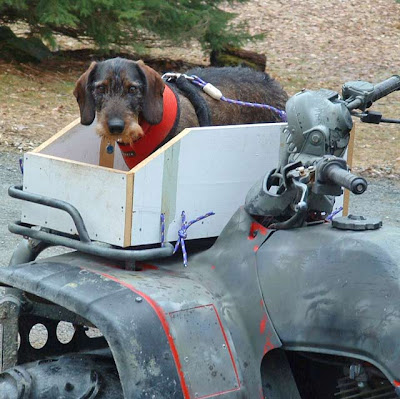 One of the advantages of dachshunds as tracking dogs, is their size and portability. These days a lot of hunters use ATVs, and dachshunds can be transported this way with ease. Below there is a picture of John and Billy taken in 2006 on one of the local deer calls. It was quite a haul up the steep mountain and getting there on a four wheeler really saved time and our energy. 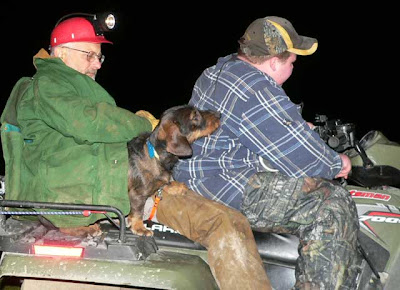 Posted by Jolanta Jeanneney at 7:34 PM No comments:

This post by Patrick Burns should be read by everyone who is planning to get a blood tracking dachshund puppy
http://terriermandotcom.blogspot.com/2009/06/whats-wrong-with-working-dogs-as-pets.html

Very well said!!! Below are pictures of working dachshunds in Spain: 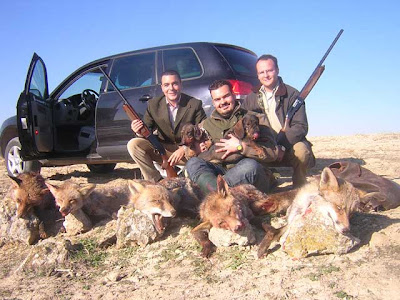 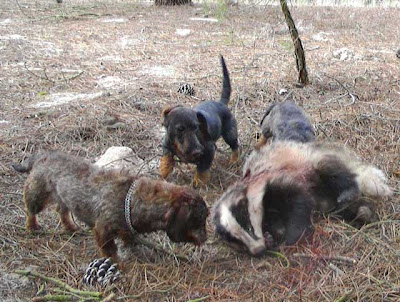 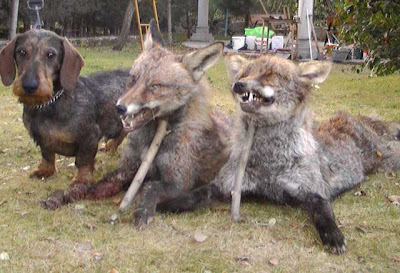 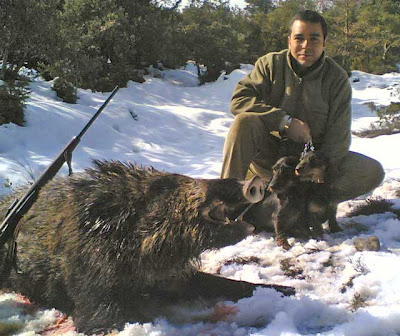 Posted by Jolanta Jeanneney at 11:31 AM No comments: 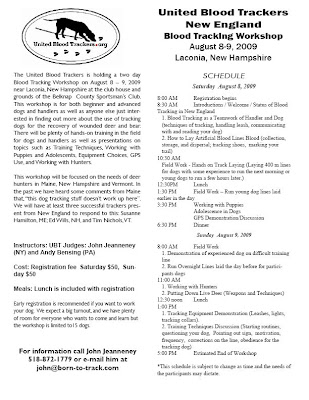 Download the flyer and registration form from the United Blood Trackers website at http://www.unitedbloodtrackers.org/laconia-premium-list.pdf
Posted by Jolanta Jeanneney at 7:13 PM No comments:

On Saturday, May 30, the North American Teckel Club held a blood tracking test at Rockaway, NJ. The test was judged by Mlle Agnès de France, Andy Bensing and Teddy Moritz.

According to the regulations the blood line is 1000-1200 meters long, has three right angle turns and three wound beds. No more than 0.25 liter of blood is used for the line preparation. The dog has to track on the special tracking leash, which has to be at least 6 meters long.

The evaluation of the dogs at the blood tracking test is accomplished with multiplier and score numbers. The following categories of performance are tested and evaluated as follows:

For the I Prize the minimum required total score is 85 points, for II Prize 68 points and for III Prize 50 points. 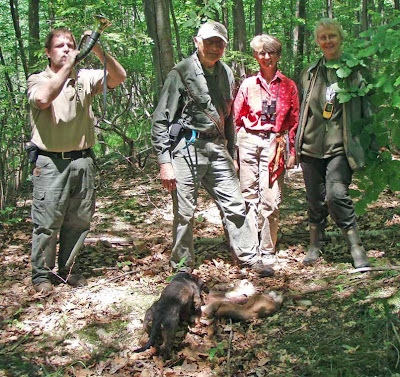 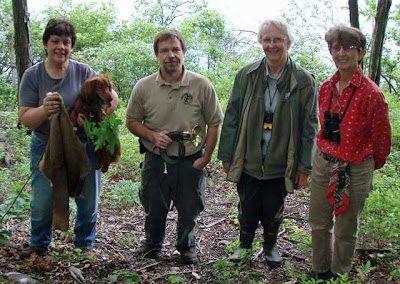 Congratulations to handlers and their dogs. A big thank you to Andy Bensing for the pictures.
Posted by Jolanta Jeanneney at 9:38 PM No comments:

On Sunday, May 31, the NATC held its spring Zuchtschau at Rockaway, NJ. The show was judged by Mlle Agnès de France, President of French Club des Amateurs de Teckels. Altogether there were 24 entries.

This is a very different type of show than an AKC dog show, where the emphasis is put on competition. At a Zuchtschau each dog is evaluated individually according to the FCI standard for dachshunds #148. The critique of every entry is done aloud, and it is also recorded on a special form. The owner of the dog receives the form with the results of the evaluation. Dogs are given a rating and the three highest ratings are:
Vorzüglich, V (Excellent)
Sehr Gut, SG (Very Good)
Gut, G (Good)

It was a good day for our young males as both of them, Joeri vom Nonnenschlag and Tom vom Linteler-Forst, got a Vorzüglich rating. At the end of show a winner was chosen for every coat type (smooth, longhaired and wirehaired). Our Joeri was the wirehaired winner, and then he was chosen to be the "best in show". The pictures below show show the judge Mlle Agnès de France with winning dachshunds and their owners (many thanks to Ed Wills for the pictures). 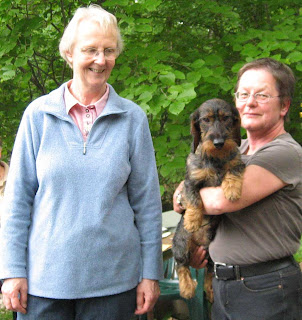 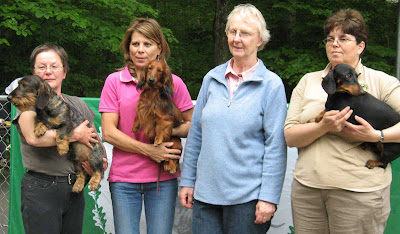 Other pictures from the show can be accessed here.
Posted by Jolanta Jeanneney at 9:47 PM 3 comments: