"Karma will accept trailing credit for 2008 no. 7 but Effie Betts gets credit for the find! The evidence showed that this poor animal had been harassed by coyotes for hours. He covered a circle about a mile through the center before succumbing to his wounds and tormentors. 20 hours after the hit he was still warm when found." 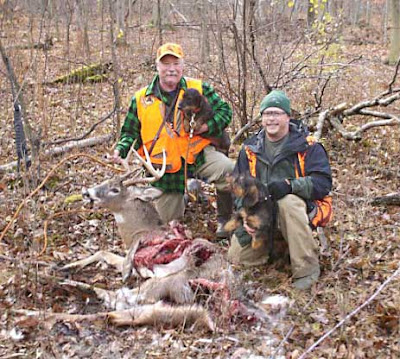 Kevin Armstrong with Karma and Ron Betts with Effi

The SUNY College of Environmental Science and Forestry is a good source of info on coyotes in NY:

These days coyotes are omnipresent and firmly established in New York State. Their numbers have been estimated at between 20,000 and 30,000. The eastern coyote is considerably larger than its southwestern cousin, and the largest individuals are as big as smaller timber wolves. Adults may range from 35-45 pounds and some large males may exceed 50 or 60 pounds in body weight.

Coyotes gradually extended their range eastward after wolves became extinct in the eastern U.S. and southern portions of Canada. Coyotes first appeared in the early 1900s in western Ontario, in the 1920s in New York and progressively later across New England until their appearance in New Brunswick in 1975. Recent studies using DNA analyses clearly show that hybridization with wolves has occurred, most probably in southern Canada where populations of wolves and coyotes adjoin each other.

John wrote the below article in 2001. Since then coyotes actually have become an even more serious problem. In the Northeast if a wounded deer is left in the woods overnight, very often in the morning the only thing that can be recovered is its carcass. The picture below was taken in October 2007. The deer was shot in the evening and this is what we found next morning: 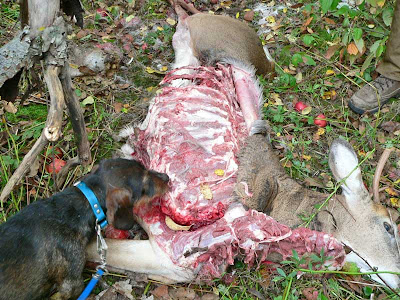 When large numbers of coyotes began to appear in New York State about 15 years ago, it really changed life for hunters and not for the better. The new, northeastern coyote was a bigger animal than the one found out west, and DNA studies suggest that there were some timber wolf genes in the background. Dachshunds, beagles and feists were at risk, particularly at night and even bigger dogs were ganged up upon. My days of using my blood tracking dachshunds for coon hunting soon ended, and this was one of the reasons that I purchased my black mouth cur. At the time I also had a little Jack Russell, and I took the chance of taking him out one night with the big cur dog in a place where I thought there were no coyotes. Coyotes did nail him when he ranged off about 150 yards. Little Banner gave one yelp, the coyotes gave a chattering, laughing bark and I never saw him again. All I found was some white terrier hair. It was hard to lose a game little den dog, but it would have been a disaster to lose a dachshund blood tracker with years of experience.

I am no lover of coyotes, which spoiled some of the good night-time fun that I had in the 60's and 70's. There are a lot of good ways to take revenge. Where it is legal try a .223 rifle and a fawn bleat call in June. You can also get satisfaction by depriving coyotes of undeserved venison feasts during the deer season.

In Grampa's youth a deer shot in late afternoon and not immediately found was left until morning. The coyote invaders changed all that. Nowadays you can't leave the wounded or dead deer out over night in many parts of the Northeast. Now it's a race to find the deer before the coyotes do. A good tracking dachshund, or a good tracker of another breed, will find that deer quickly in situations where the deer goes too far for an infra-red deer finder, and hours of eye tracking only take you to the end of the visible blood trail.

If a deer is shot just before evening we like to get on the line with a good dachshund within two or three hours. Ideally it would be better to wait longer in the case of a gut shot deer, but we are between a rock and a hard place. A) If we don't wait and we jump the deer while it is still too "green," then we may be in for a long ramble through the hills. B) If we wait, the trail may be shorter, but there may well be a fresh deer skeleton at the end. Scenario A has less risk and exercise is a good thing for almost everyone.

My adventures at the Wade hunting camp in Schoharie County, over two years, are a good example of how things work, or don't work, on wily coyote's new turf. In 2000 I got a phone call from the Wades during bow season. They had shot a nice buck and had tracked him a mile before losing him at dusk. I got there within another couple of hours and my dachshund had no trouble taking the line another half mile to the deer, or at least half of the deer. The hindquarters were already gone. This was the work of more than one or two coyotes.

This season (2001) I got another call from the Wades. A family friend staying with them had a similar problem. Mindful of what had happened the previous year, I dropped my own plans to bow hunt and hustled over well before dark. Seven hours earlier the buck had been hit low and too far back, and this time we wanted to beat the coyotes to their dinner. My dachshund Sabina took the line 300 yards beyond the hunter's point of loss to jump the deer still alive and strong. Well we had a ramble up hill, down hill for almost five miles. All blood sign soon ended but because of the nature of the wound there was plenty of scent. At 7:30 PM we had been close to the deer several times according to Sabina, but the buck began to walk in circles about 200 yards across. He went around twice on the same trail in a dense pine forest. In this situation when you are close behind the deer, there is a danger of losing him. Your dog is tracking through a tunnel of floating body scent. After a couple of loops the deer can break off to the side and fool the dog... at least for a while. We weren't catching up to the deer; coyotes or no we decided to break off and take up the trail the next morning.

About 12 hours later we were back on the trail. As we suspected the buck had tried to pull a fast one, breaking out of the circle on the third loop, traveling over the diameter of the circle and out across a large overgrown field. There was no blood but the line was still easy for the dog to follow. Actually it was easier because by this time there was a scent line instead of a scent cloud. At the far edge of the field the land pitched down through hardwoods for several 100 yards. The wind was flowing up the hill into our faces. First Sabina's head came up and she pulled straight down the hill; next I saw a light gray carpet of deer hair spread out under the trees and finally I saw the deer... or three quarters of the deer. The coyotes had beaten us again, but not quite as badly this time. The young hunter was delighted with the rack and the remaining venison. Antlers add a delicate flavor to venison soup.

The coyotes do not always do as well at the expense of deer hunters. Usually we find the deer first; more than once we have come upon the deer just as the coyotes were breaking in. They seem to like to first eat the "salad" in the paunch, so if your timing is just right you can still save everything of value. Deprived of "their" kill the coyotes bark and chatter back in the brush as we drag the deer out. I have noticed that dachshunds don't act scared in this situation, but you don't see them pulling to get at the coyotes either. The dachshund is not a fool.

Posted by Jolanta Jeanneney at 8:45 PM

Ya know What? Ihave 3 Dachshunds,a Beagle and a Chineese crested. I don't hunt. My neighbors do. I am a Vertebrate Biology Specialist..An expert in Zoology and Genetics. I find the situation very sad because nature is trying to adapt to lose of habitat and sub species. I hope you enjoy whats left... please enjoy do not destroy...we humans are the ones out of balance. too much us=way too much stress them. O.K. thanks... If you want to reply phenixrus@yahoo.ca

Looks like the deer hunters need to take better shots. Its not the coyotes fault. They are doing whats natural. Better shot, drop the deer where it stands. Even a follow up shot to finish. No deer hunters wants to loose their kill nor see the animal suffer as in these stories, thanks for sharing!

Personally I find it revolting that you say to take revenge on coyotes. They are an animal and they go by instinct. We as humans are out hunting for fun which is disgusting. No wonder the earth is so out of sync. We as a human race or ruthless and ignorant to the way the world and nature works. It's different if you're hunting for food, but just out hunting is sick and wrong. No offense to you, but it makes me so mad that people do this and not only that, but you left the deer shot but alive and then the coyotes got it. What a truly horrible fate for such a peaceful creature.