First Track for us Both

It was with great anxiety that I anticipated the start of the tracking season this year.  My 9 year old veteran dog, Eibe, had continued to partially lose her sense of smell since last year and I knew she would only be able to handle a very limited number of calls this year; perhaps even fewer than last year.   On top of that my two 16-month-old young dogs, Hazel and Hunter, who I have been training for the last 14 months were struggling to come out of a very difficult adolescent period after demonstrating unbelievably great work, basically perfect, up to about  7 months of age.  Hazel had been coming along especially well the last month of training but I still had my reservations as to how much I should put her in the field this year.

When I train a dog I always look at the long term results, and I don’t like to put a dog into the field to soon on an unknown natural line until I can fully trust the dog.  On an unknown natural line, a young dog can learn a lot of very bad habits if you are not careful.  The most damaging  bad habit being that the dog can learn that it is enjoyable to track any deer, not just the wounded deer that they started on.  Hazel’s last three training lines before the start of our season showed me enough progress that I planned to definitely put her in the field this year but I planned to be very careful in track selection.  My strategy was to screen calls carefully for her and only take tracks likely not to be too long and the ones that have a dead deer at the end.  The last thing I really wanted was for her to jump and chase a wounded one still alive.  She was already gamey enough.  She certainly did not need that type of stimulation.  I also planned to curtail any track we might be on if I did not have some confirming sign or circumstance where I could be absolutely sure we were still on the correct deer.  Without confirmation, I planned to quit any track where I had not have confirmation of some sort for more than 200 yards.

Well luck was certainly with us for our first call of the season this year.  When the phone finally rang last night I got a call that sounded close to perfect.  An hour after the hit the hunter had started tracking and tracked 200 yards to a puddle where the deer stood with drips of blood.  My interview of the hunter revealed a likely liver hit so the deer had a very good chance of not being very far from the puddle and almost for sure dead.  The hunter got to the puddle 2 hours after the hit and judging from the described light blood trail coming to the spot where the deer stood, the deer had stood there a long time to create the puddle.  The hunter on my advice decided not to continue tracking and give the deer more time to die.  I arranged to meet the hunter at first light and put my rookie dog Hazel on the deer.

At the hit site in the morning, Hazel’s natural instincts really kicked in.  There was only a small speck of blood at the hit site, which she basically ignored and clearly locked right in on the hoof/body scent of the wounded animal.  She easily tracked the 200 yards to the hunter’s point of loss in 5 minutes. Her adolescent lackadaisical attitude that she still showed in some of her recent training was nowhere to be seen.  It was all business.  At the point of loss at the puddle where the hunter and 2 helpers had done some walking back and forth  she had some trouble.  In her training she had never encountered that type of thing before.  She seemed to interpret it like it was a star, which we had trained for and after  maybe a 5 minute long check in the area of the puddle she found her way out.  For a moment  during the check I thought she was going to lose concentration and drift off onto junk, something I still saw but less and less in training.  But with a very light call of her name by me standing near the point of loss, she refocused and found her way out.  She got back on the line, pointed out a spot of blood to me maybe 30 yards past the point of loss, and found the deer maybe 20 yards past that.  It was a perfect situation: Right after correcting herself back onto the line a big reward; the dead deer for her to tear into.

This certainly was not a difficult track.  Even my Eibe with her debilitated nose could have found this deer only 12 hours after the shot. Heck, the hunter would have found without the dog, but it was a perfect track to further develop my dog.  And as you can see from the photo, the deer sure made for a great photo for my dog’s first find of what I hope is a long career. 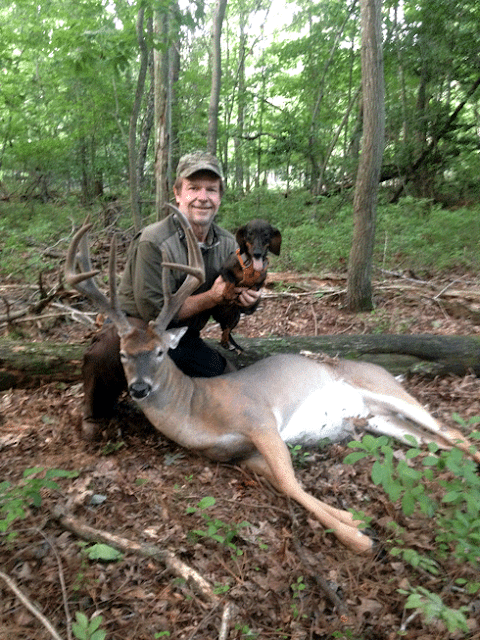