These days it is not easy for us to get away to attend field trials so it was a real treat when Emillie, John's daughter, agreed to come and stay with our dogs two weeks ago. John and I took Kunox, Tuesday, Mielikki and Tommy to field trials held at Niagara River Beagle Club in Alexander, NY, where beaglers running the club feel like our own family.

There were 9 entries in the Open All-Age stake and our Kunox von der Dohlmühle placed first. He also was Best of Open and then to went win the Absolute run over the best Field Champion of the day, Laurel Whistance-Smith's FC Lykke von Lowenherz SE, who is our Joeri's daughter. It was a great day for Laurel's dogs as her FC Diamant Lily von Lowenherz ME placed 2nd in the Field Champion stake of 31 (Lily is our Asko's daughter) and FC Stanze von Lowenherz SE was NBQ.

On Sunday, September 14, Kunox was not called back for the second series, but Tuesday was called back high (she had a very good run against Sherry Ruggieri's Niya) and she held on to the first place. She won The Absolute run, just like Kunox did a day before. Our Tommy placed 4th.

This past weekend I made a trip to New Jersey by myself and took with me Kunox, Tuesday and Mielikki. Entries were similar to those two weeks ago. on Saturday at Bay Colony Dachshund Club field trial there were 9 open dogs, 9 open bitches, and 29 field champions. On Sunday at Dachshund Association of Long Island trial we had 9 open dogs, 10 open bitches and 27 field champions.

On Saturday Kunox placed 3rd in the open stake, and Tuesday was called back 3rd for the second series. She had some great runs and ended up first and then winning the Absolute run.

On Sunday Tuesday ended up 2nd in the Field Champion stake, and she impressed me a lot with her performance and consistency. Kunox suffered a total mental block in the first series and acted like he did not know what he was in the field for. Is this a sign of adolescence (he is 14.5 months)? I was totally embarrassed but then on our way back to the car we came across a cottontail sitting in the lane. Kunox saw it and then recognized the scent. It was like "Oh, yeah, there are rabbits here!" Luckily he was called back as a bye dog and had another chance to run. He did much better in subsequent runs and ended up winning the trial.

The picture shows Kunox with all his first placements and Absolute wins he got so far, and it was taken for his breeder Annelie Grauer from Germany. Thank you Annelie for this talented dog! This was Kunox's third Absolute win. Unfortunately, even though so far he has gotten 3 first places and several other placements he is not a field champion yet as open stakes on the east coast are pretty small these days. Well, he does not care what stake he runs in, that's for sure. 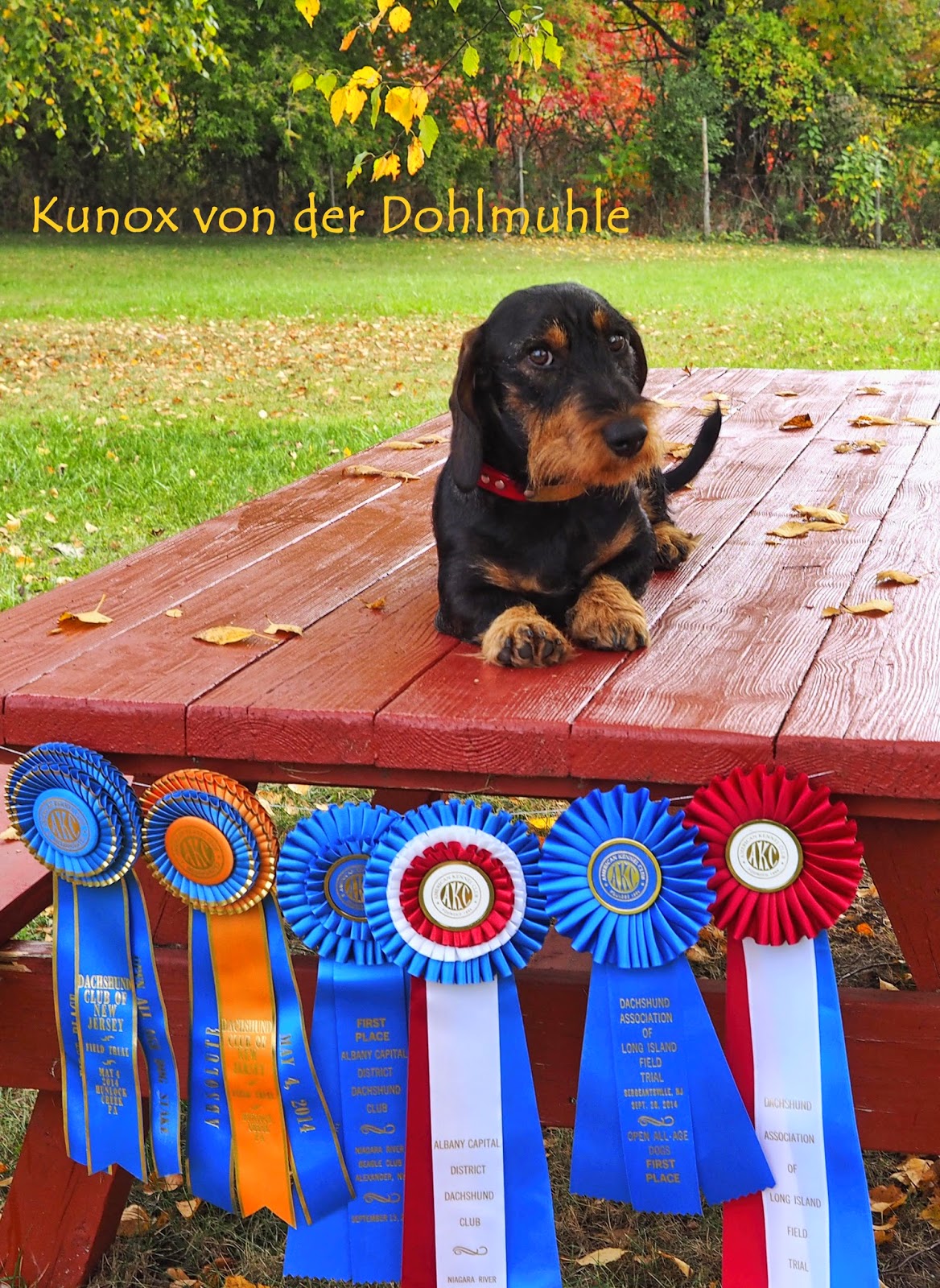 Posted by Jolanta Jeanneney at 10:51 PM No comments: