Recently our posts have not been very frequent as we are busy with the two new litters that were born six days apart.

The first litter, our "P" litter (puppies' names will be starting with the letter "P") was born on March 30, 2009. The sire of the litter is "Théo" Du Théo de la Meute à Cheops bred by Patrick Mestadier, France, and owned by Alain Ridel, Canada. 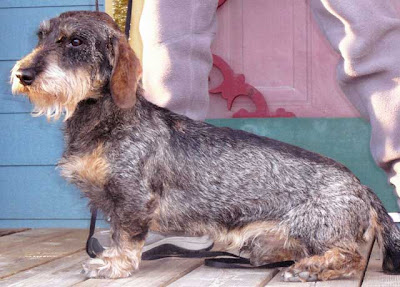 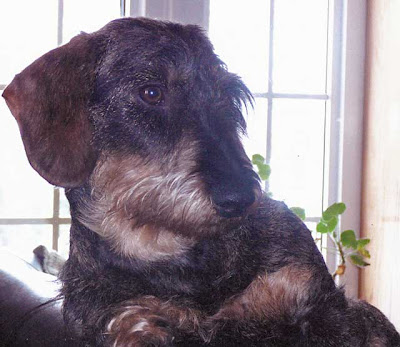 We have written about Theo on this blog before. This is Theo's first litter.

Keena is four years old, and she came from the first breeding of Gilda to Billy. She was bred once before, and two years ago she produced a very nice litter of seven puppies. This was our M litter, sired by Susanne Hamilton’s Buster, and the pups were: Matthias aka Petey (Sally Marchmont, VT), Melodie aka Greta (Susie and Jody Gardner, OH), Mirabell (Robert Rubie, MI), Mikki (Warren Strickland, AL), Max (Robin Ernst, SC), Magnum aka Doc (Joe Walters, IN) and Moose (Kyle Stiffler, MI). These dogs are almost two years old now, and have already proved themselves to be talented trackers. 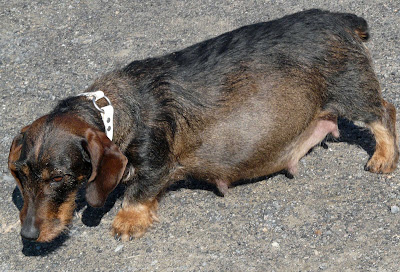 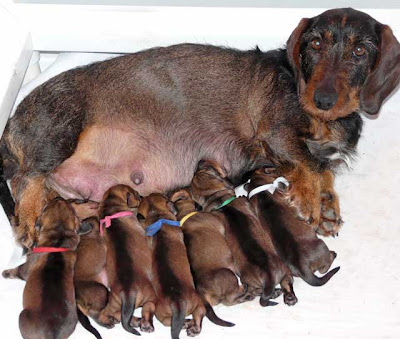 The second litter, 4 females and 4 males, was born on April 4, 2009, and it is our "Q" litter (puppies names will start with the letter "Q"). This is actually a repeat breeding that Keena came from - a sire is our FC Billy von Moosbach-Zuzelek and the dam is FC Gilda v Moosbach-Zuzelek. This combination, Billy/Gilda has been bred twice before. The first litter produced 4 pups: Keena, Karma (NY), Karlee (MI) and Kip (MI). The second litter, a year ago, produced 6 pups – Eddie (VA), Eiffel (called Ely, MI)), Elsa (SD), Emmy (Chloe WI), Eika (called Ziggy, NM), Effi (NY). They are very good blood tracking dogs. This breeding has produced pretty large, strong dogs with excellent tracking desire. 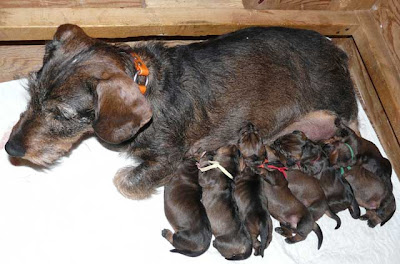 Gilda with her eight five-day-old puppies

We are not sure yet, but we might have a couple of male puppies available (only serious working homes are considered). Before you contact us read http://www.born-to-track.com/buying-puppy.htm

Posted by Jolanta Jeanneney at 8:06 PM