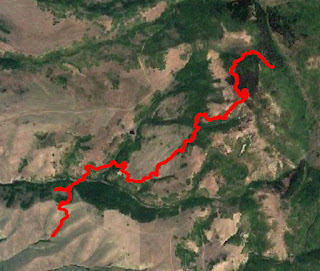 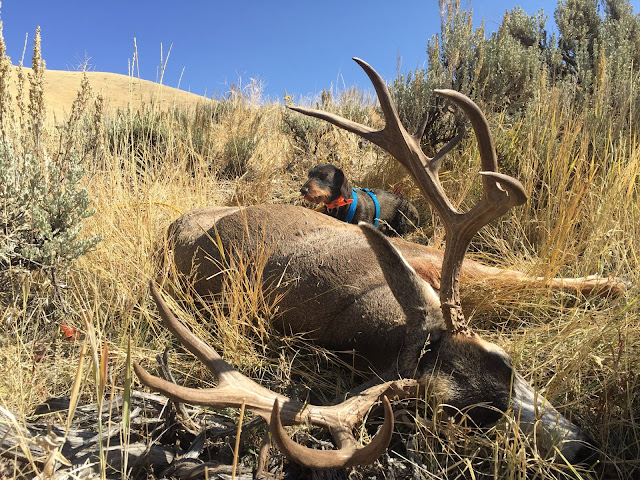 Yesterday, was quite a day. It started off with waking up to our little Yorkie completely lifeless. We rushed him to Marion Lott, at River Valley Vet, barely breathing. They spent quite a while trying to bring him back & get him going again. He had gone into hypoglycemic shock, and I thought for sure he was gone. As we were anxiously waiting, praying he would respond to their treatments, he finally began to show some signs of life.

During the midst of this, I received a phone call from our friends at J&J, saying they had wounded a deer Wednesday evening, and were wondering if Remi the wonder dog could track it down. I left with Remi & his gear in tow, and we headed towards the mountains. This turned out to be one of the most intense, grueling, difficult tracks this little teckel has done. We started out in the high country, in a mix of chaparral & pine trees, worked our way around the mountain, down a rock slide, through several thick oak brush and maple stands, down the middle of a few two track roads, and across some grazed off pastures.  Just as we were about to call off the search, due to extreme fatigue, exhaustion, and being completely out of water, we caught a glimpse of what looked to be an antler between some grass and sage brush. Sure enough, against all odds, and some extremely wicked terrain, Remi saved the day once again!

The track was over 3.5 miles long, not including all the loops and back checking work the dog has to do, to continually double check himself. Calculating that distance in, the miles were easily doubled. Every time I work with Remi on a track, especially one of this magnitude, he never ceases to amaze me. Especially considering he has been run over by a 3/4 ton truck, which required him to have a total hip replacement, was gored by a deer, which lacerated his liver, and punctured his intestine, went head to head with a coyote, multiple throw downs with porcupines, disappeared the whole day, after jumping out of the truck in the rugged mountains of Wyoming, to go after an antelope that he watched fall down after trying to justo through a fence, signaling the "this must be a wounded animal I need to track" response. My little soul mate has definitely defied all odds on multiple occasions. We gutted the deer, gave Remi his liver reward, then quickly sped home to watch my other son play his last football game. He threw some amazing passes, and a long distance  touchdown pass. I am so grateful for these boys of mine. Definitely a proud papa, full of miracles day.