Update: all puppies mentioned in this post are spoken for.

If you are thinking about getting involved in tracking wounded deer with a dog, there are a number of puppies available to blood tracking homes.

Let's start with the Northeast.


2. Laurel Whistance-Smith from Ontario, Canada, has one very promising female puppy available from the litter born on May 16. Contact Laurel at 705 277-9183 or manverspack@nexicom.net.

On the West coast:

3. Claire Mancha from Portland, OR has two standard smooth pups out of European lines. Her e-mail is claire@whiz.to. More information available here.

Posted by Jolanta Jeanneney at 10:56 PM No comments:

An interesting post from Andy Bensing, who is an owner of Peacock Bridge Kennels, boarding and training facilities in Reading, PA.

Aryl is a six-year-old wirehaired dachshund that recently had been returned to me because he no longer "fit in" to the owner's lifestyle. I originally sold him as a puppy to a tracking home in the mid-west. During his first few years he received quite a bit of tracking training and opportunities to take natural lines. Some of his finds were quite challenging. He also had some pretty nice obedience training done including the use of the e-collar.

When I got the call that Aryl needed a new home I of course agreed to take him back and thought it would be relatively easy to place him in a new tracking home. The only problem reported was that he did not particularly like kids or women as he growled and sometimes snapped if picked up by either. He reportedly had never actually bitten anyone. When I got him home and checked out his tracking ability it was great, but unfortunately it turned out that his aggression problems were much worse than reported. It makes finding him a new tracking home very difficult unless they could be reduced.

Here is a video of the work my wife and I are doing to work on one of those problems, Resource Guarding. I wish I had videoed him when we first started. You will see him quite aggressive on this video but it was much, much worse 2 months ago.


We will continue to work on all his issues with the hopes that he will become manageable enough that we can place him with a tracker that has enough dog experience to handle him and value his tracking ability enough to override the extra responsibility of owning a dog like this.

Today we got a really interesting e-mail from Marit and Fredrik in Sweden. Make sure that you check their post as it is very informative. And while you visit their blog, don't miss their outstanding photography. They live far north of the Arctic Circle!

We enjoy reading your blog and have recommended it to the readers of our own blog: http://www.northernmost.se/archives/9695

We live in the north of Sweden with our pack of Alaskan Malamutes that we train in blood tracking and have gained many useful tips from your books.

Have a good tracking season!

Thank you Marit and Fredrik for mentioning us in your post and recommending our books!
Posted by Jolanta Jeanneney at 10:56 PM 2 comments:

Tuesday, a four-month-old puppy, shows a lot of promise for field work

I will blame the Olympics for interrupting my flow of blogging. It was a lot of fun to watch TV at night, but the blog suffered because of it. As it turned out it has been harder to get back to the routine than I anticipated. Also this has been an exceptional summer as far as the weather is concerned, and it is hard to spend much time in front of the computer when you really want to be outdoors.

I  am planning to write a post about biddability in dachshunds as this topic has been on my mind for quite a while. But it will be easier to start with something not as difficult so let me write a little bit about Tuesday. She turned four months old on August 6, and we could not be happier with this little pup. I don't know how big/small she is going to be when she is mature but at 4 months she was about 11.5 lbs. This is pretty small for our dogs at this age.

We really like her personality - she is intelligent, curious and responsive; her energy level and excitability are not excessive. She is nose oriented and has been doing really well in the blood tracking training. Her tail action shows that she started to respond to the rabbit scent on the lawn and in the woods, and follows it for some distance, but she has not opened yet. This will probably come between the age of 6 and 7 months. When I take her for the walks she ranges further and further with every outing but she also checks back with me regularly.

Yesterday Susanne Hamilton was visiting us, and she owns Tuesday's grand sire Buster (FC Clown vom Talsdeich). She was completely smitten with Tuesday, and declared her to be very "special". It is easy to see why as this puppy is very social and affectionate, and she seems to love everybody she meets. A couple of weeks ago we took her to an outdoor concert in a nearby town of Altamont, and Tuesday had a blast. She was not concerned about loud music and commotion at the grounds.

Below are several pics taken in the last two weeks. 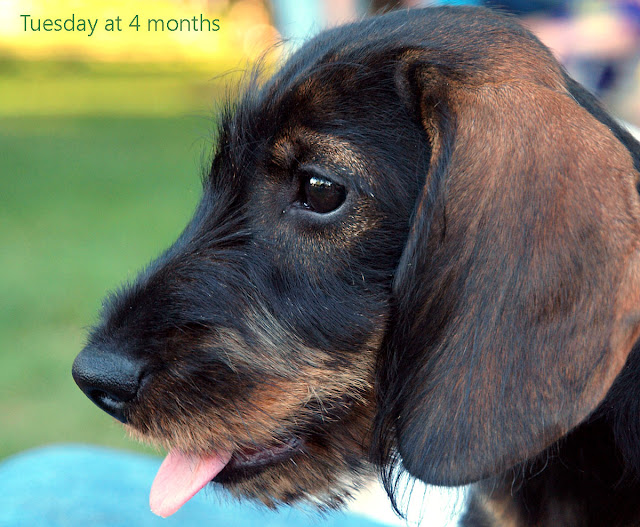 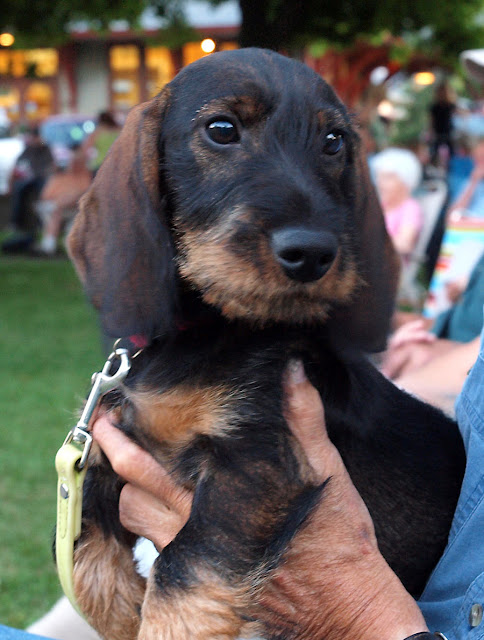 Colors in our mid-August woods and fields

Pictures of dachshunds have dominated the blog for quite a while so it is time to broaden our horizons. There is so much beauty around us! 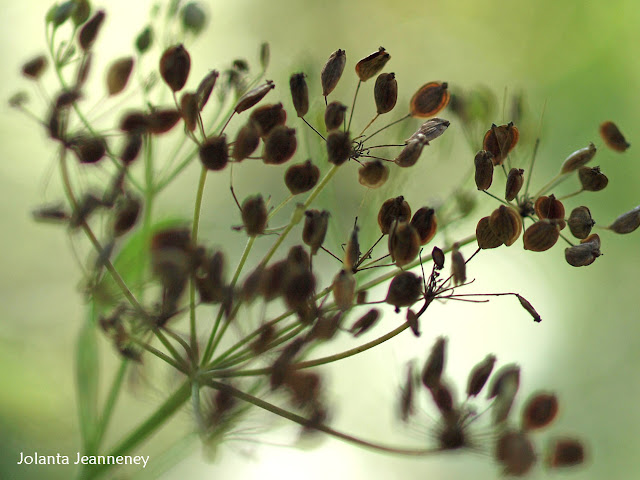 Posted by Jolanta Jeanneney at 8:43 AM 4 comments:

Email ThisBlogThis!Share to TwitterShare to FacebookShare to Pinterest
Labels: nature pictures, our place

Theo (Theo von Moosbach-Zuzelek) turned four months old on August 6, and one day later he passed a UBT I blood tracking evaluation. Andy Bensing from Reading, PA, was a United Blood Trackers judge. Now Theo's owner and handler Darren Doran from New Jersey will be able to put him on the Special NJ Permit required to track in that state.


Darren has been training Theo's very diligently. I posted several of his tracking reports but not all of them. When a couple of weeks ago Theo did well on a four-hour-old 450-yard line prepared with the scent shoes and 2 ounces of blood, Darren asked me not to publish the report as he did not want people to think that all puppies can do this. He said "I've been very careful to never ask Theo to do more than he is able. But I think Theo is something special."

It's really nice to hear Darren's opinion as it confirms our experience with S- and T-puppies. After all we have Theo's brother Sky and Theo's sister and litter mate Tuesday, and we think very highly of them. It looks like the breeding of Paika (FC Paika von Moosbach-Zuzelek) to Moose (FC Nurmi von Moosbach-Zuzelek) has produced pups with a really good potential for blood tracking and hunting. But inborn talent does not guarantee that a tracking dog will succeed. A key component is a dedicated owner who takes dog training seriously and makes sure that once the dog is trained he used on a real thing.

We hope that Theo continues to do so well! In the next post we will talk more about other S- and T-pups.

Niya, a young wirehaired dachshund from Hungary shows a great potential for tracking and hunting

Last weekend was very busy and filled with fun, dachshunds and friends.We wrote about Genti and Beth Sheros' puppies in the previous post.

We also had a chance to get to know Sherry Ruggieri's wirehaired dachshund puppy Niya, which she imported from Hungary. Niya's registered name is Tüsöksori-Ugrasztó Husniya, and she is five months old. She has a perfect tight coat with nice furnishings, and her size is quite small, just under 12 lbs.

Niya has never been exposed to water before, but she took to our pond like an otter. She did not need any encouragement at all, just entered the water and started to swim. Sherry was a little nervous to let her go all the way as Niya looked like she wanted to swim across the pond. You are a good and brave girl Niya! We finished the session with throwing a ball for her, which she promptly retrieved. 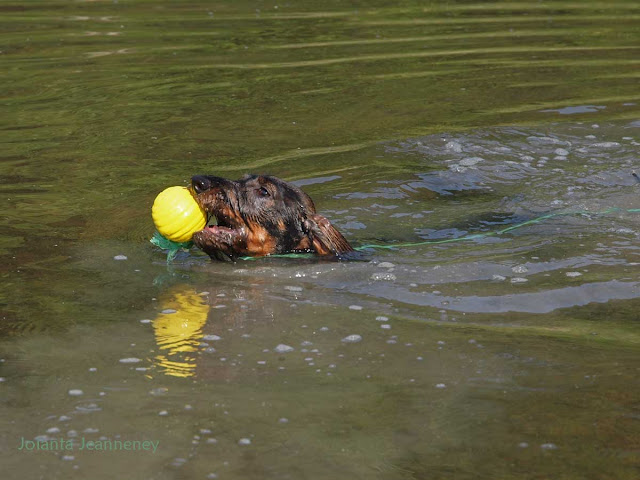 When we did some blood tracking work with Niya on Friday and Saturday, we quickly realized that she is ready to pass UBT I evaluation. Both John and I are United Blood Trackers judges and eligible to judge Niya. The UBT-I demonstrates the basic skills necessary to track wounded game by assessing the ability of the handler/dog team to follow an artificial blood trail. This is not a test comparable to a 20-hour-old line prepared according to the European tradition. More information about the UBT evaluation program can be accessed here.

Early Sunday morning John laid a 400 yard track for Niya with scent shoes and three ounces of deer blood. The line had two turns and one wound bed. Niya was put on the line two hours and 20 minutes later, and her performance was flawless. It took her 15 minutes to get to the deer hide placed at the end of line, and she showed a good interest and aggressiveness towards the hide.

Since Sherry, a United Blood Trackers member, lives in new Jersey, now she will be able to put Niya on a special permit required to blood track in that state.


Good luck to this new blood tracking team!
Posted by Jolanta Jeanneney at 9:44 AM 3 comments:

Billy and Mae's puppies have arrived: a new generation of deer tracking dachshunds is born

On August 1 Mae (FC Mae von Munterkeit) whelped with ease 7 puppies - 5 males and 2 females. Mae is owned by Deer Search members Beth and Genti Shero from Poughkeepsie, NY, and she is out of three-time winner of Deer Search's blood tracking competition Jessie v Moosbach-Zuzelek. The sire of this litter is our FC Billy von Moosbach-Zuzelek, SchwhK Prize II, Wa.-T, BHP-1, BHP-2, BHP-3.
We wrote about Mae many times on this blog as she is a talented blood tracker certified by Deer Search and a very versatile hunter. She loves to swim, opens freely on rabbits and has plenty of game aggressiveness. We like Mae very much, and this is why we kept Bella, a puppy out of her and Tommy's 2011 litter.
More info about puppies can be accessed click here. Genti Shero can be contacted at (845) 222-3261
Yesterday, on Saturday, Genti, Beth and their daughter Dea visited us, and they brought their very nice eight-week-old pups out of their Mariel and Achilles. We had a lot of fun with them. Sherry Ruggieri, who also is visiting this weekend helped with the evaluation of pups' conformation. Below pictures show Sheros and their puppies. 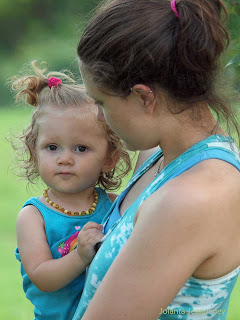 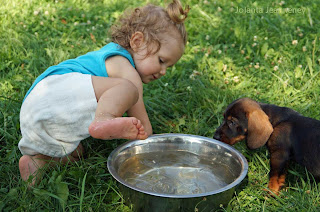 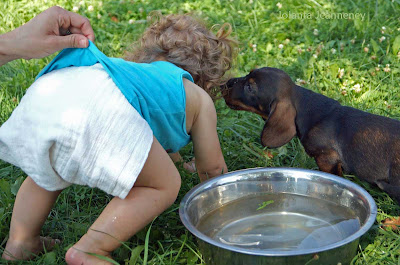 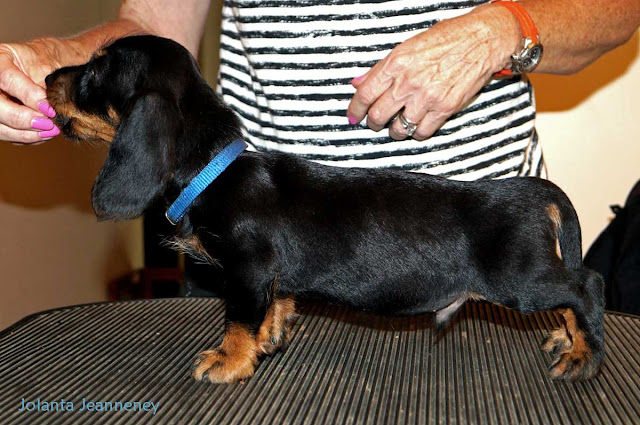 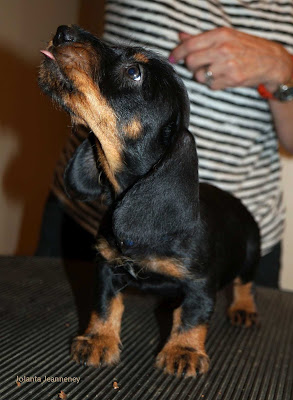 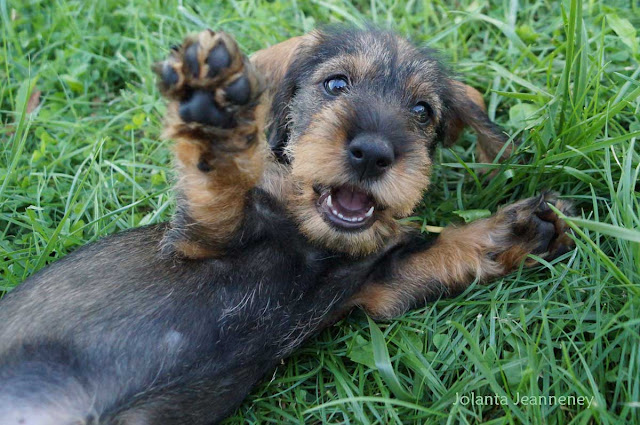