Reposted from kjas.com  (thank you Claire for the link)
by Steve W Stewart

The Texas Parks & Wildlife Department says they want public input on a proposal to bring back a currently illegal deer hunting practice of tracking wounded deer with dogs. The state agency says public hearings are planned, and if approved, tracking wounded deer with dogs could soon be brought back in 12 East Texas counties, something that has been illegal since 1990.

State officials say they will take the results of the public forums into an August 22nd meeting at TPWD Headquarters in Austin.

Currently, tracking wounded deer with dogs is illegal in 34 East Texas counties. Texas Parks & Wildlife says the rule was necessary because the department determined that dogs were being used unlawfully to hunt deer, which was causing depletion.

However, the state agency says that by 2000, they determined that the practice of using dogs to track wounded deer had declined to the point of being nonexistent in some of those counties, so they removed the restriction in 10 counties.

The meetings will be held:

Officials also say details about the proposal, along with an opportunity to provide public comment, can be found online at

Comment may also be made in writing, and mailed to Robert Macdonald, TPWD Regulations Coordinator, 4200 Smith School Rd., Austin, TX 78744.

Posted by Jolanta Jeanneney at 10:26 AM No comments:

This smart puppy has stayed on a right track

Ray Holohan, a United Blood Trackers member from Illinois, shared with us his recent experience. Here it is in his own words:

I thought I would drop you a line to share this peculiar training track I experienced this last weekend.

Saturday about 3:00 pm I decided to lay a short training track in my home timber for my new pup Ruffle "Ruff", early the next morning .  The track was 15 hrs. old and about  1/8 of a mile. We started down the trail, all was well, she was doing a good job when I looked up ahead and spotted what looked like a dead deer right on the blood trail. As I got closer it became quite clear that's what it was.

I thought to my self how should I handle this. I decided to let her find it and congratulate her with all the praise I usually do. To my surprise she walked up to the deer sniffed it. then sniffed her way around it and continued down the blood trail and found the hide and reward at the end.

At first I took this reaction as a negative but the more I thought about it, I think she knew that it wasn't the thing she was looking for, thus ignoring it and moved on. What do you think about this? After finding the hide I went and got my camera phone, took her back and let her back trail to the deer.

She seemed a little frighten, of the deer this time so I took a stick and got some of its blood from a damaged antler and let her lick and smell it, and she became quite comfortable with it. I wanted to make this a positive experience. The deer at first looked like a limb had fallen on it, it was wedged underneath it, but after a closer look I think it may had been struck by a car, probably on the highway about a 1/2 mile away and got that far before it died. I got a recovery tag from the DNR and was able to recover the blood and hoofs. Has anything like this ever happened to you or John?

Well, I thought that Ray handled the whole situations really well. Obviously he has a very smart and talented puppy, which was staying on a right track and knew that the deer did not "belong" there. She was intimidated by the deer, but that's completely normal for a young pup.

Something similar happened quite a few years ago when John and I tracked a deer with two dogs, Alec and Sabina. John wrote about it in his book Tracking Dogs for Finding Wounded Deer.

"Staying  on the right  line, no matter what, is usually the most difficult skill that a tracking dog must learn. My old Sabina demonstrated how reliable an experienced dog can become:

My wife and I  tracked a buck together. On the phone it sounded like an easy one so we took one of our young wire males, Alec, who had  training but no natural experience. My wife handled  Alec and I handled Sabina behind as a backup in case the young dog had trouble. Alec did a pretty good job, trailed out past the hunter's point of loss and went on for another quarter mile without help.

Then came misfortune. Young Alec tracked right into a fresh gut pile, still warm. Alec thought the guts were better than nothing and he munched a bit. The hunters and the handlers were down-hearted for sure. They had called us and we had driven a long way; now it was all for nothing. Someone else had finished off their deer and dragged him out.

Then I  thought of something. There had been some grains of corn in the track on the way to the gut pile. They had leaked out of the deer. It was funny that there was no corn in the gut pile that we were ding  over. I took Sabina back on the trail about 50 yards and let her work the line; she tracked right past the gut pile, never looking at it. All concentration, she worked another 50 yards into some thick bush and there he was, the original buck, corn, guts and all."

Dog days of summer are here

What a hot and humid summer it has been! When we bought this piece of land 15 years ago we never anticipated that we would be using a small pond as much. Anyway, few days ago I read that so far we have had 10 days with temperatures above 90F (32C) so by now the number must be at least 12. And this is just a middle of July.

Joeri gets to the pond on a regular basis, and I thought that a short video would show his mobility 10.5 months after the incident with a herniated disc. He is not 100% yet, and he might never be, but for sure he moves around pretty well and he really enjoys himself. He has always been a a very special dog and it is deeply satisfying to see him living his life to the fullest.

It has been a hot and humid summer so there is not much blood tracking training going on here right now. We have been working diligently with Mielikki's puppies, which turned 9 weeks old on Friday. Now 50 yard deer liver drags are too easy for them, and we will have to start working them on longer and more difficult scent lines. They are truly a great bunch and raising them have been a pure joy. 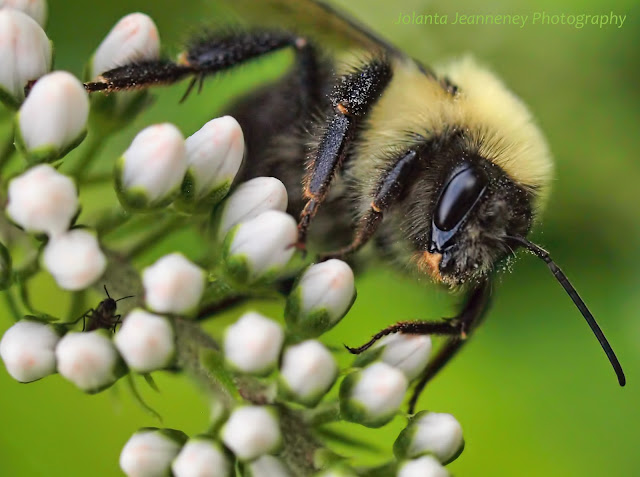 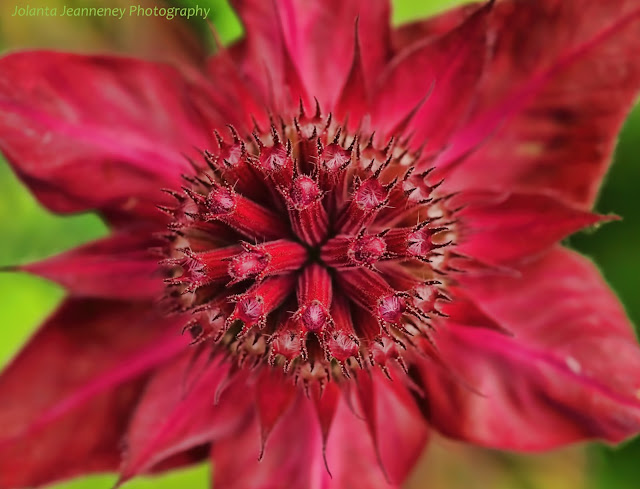 I hope you enjoy your summer as much as we do!

Posted by Jolanta Jeanneney at 10:42 AM 3 comments:

Email ThisBlogThis!Share to TwitterShare to FacebookShare to Pinterest
Labels: nature pictures, our dogs, our place, photography

Video shot at the United Blood Trackers Trackfest in Wisconsin 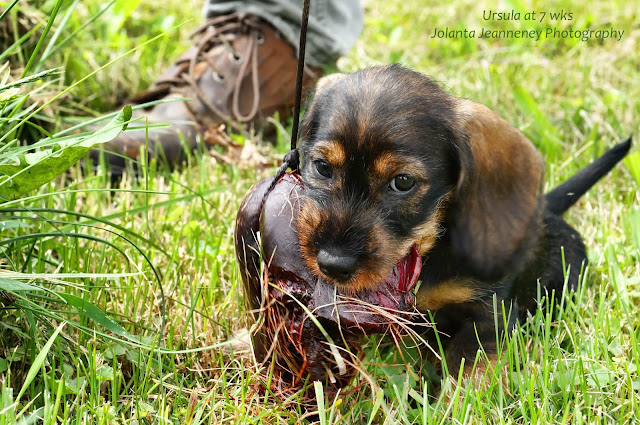 We use deer liver drags in our early puppy work, and we call it “early conditioning” rather than serious training. The scent lines produced by the fresh liver drags are easy for the puppies to follow and the puppies develop an enthusiasm to use their noses to find something good to chew on.

In early work on fresh, easy lines we prefer the liver drag to a fresh blood line. The liver leaves good scent but there is no fresh blood on the grass for the puppies to stop and lick instead of moving ahead. The pups also learn to identify the deer liver scent on the ground with the good chew on that same liver that we have left at the end of the line.

Deer livers are easy to collect during the hunting season. Most hunters seem ready to leave the liver for the coyotes, so I scoop it up, along with the heart, and carry it all home in a gallon Ziploc bag. I collect the blood at the same time for more advanced work.

There is some good scientific research to support this sort of early conditioning. When very young mammals, from human babies to baby mice, are stimulated in a certain way, the brain circuitry responding to that stimulation grows denser and more efficient. It’s possible, in theory at least, to improve future brain function beyond the level of simple genetic inheritance. This seems to work for us!

To see what our puppies have been up to go to our puppy journal at http://borntotrackpuppies.blogspot.com/
Posted by Jolanta Jeanneney at 7:55 PM 2 comments: