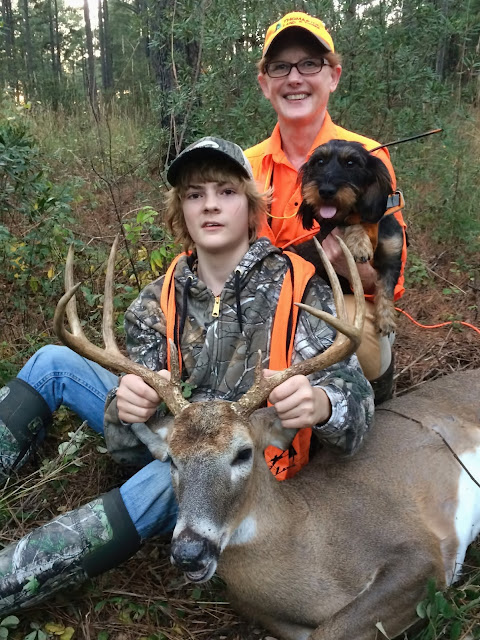 Mossy has had a busy week again this past week.  The only problem has been that most of our tracks have ended up with no dead deer being recovered, much to Mossy's disappointment.  The majority of these have been after a front leg shot, having found bone consistent with an upper long bone of the leg at the sight of the shot.  The areas these deer were shot were so thick that Mossy on leash dragging me could not move fast enough to catch the deer. And, at this point in Mossy's career, running off leash is just not yet an option.  We are getting closer to that point, but this will probably take a few more seasons of tracking. She is too vulnerable at this age to the dangers she has no idea exist, and she can move too fast.  When I was tracking off leash with Bear, he could make a deer with a leg wound move fast enough that it would usually bed down or stop and stand to defend himself once Bear had run it a mile or more, giving me time to get to them and dispatch the deer. Same scenario on a couple of occasions last year when Mossy ran off leash. As she became older and more sure of herself, she would venture further away and I am now concerned about her safety--highways, coyotes, wild dogs, snakes, etc--so on leash she will be for a while longer.

This young man, Jason had been deer hunting on several occasions, but had never had the opportunity to shoot a deer.  I have a stand that I take kids and have had a camera on it, but deer were coming by only during the night with an occasional doe during the day.  I explained to Jason that we could go and if we were lucky, we might see a deer. And, so we did.  After being in the stand for an hour with Jason sitting perfectly still and quiet, this 8 point walked out.  On the way to the stand, I had gone over the things we should and should not do to keep from spooking the deer.  His actions in the stand were those of a young man who had listened to everything we discussed and then followed through with them. I was very impressed.  When the deer was broadside, Jason took the shot. The deer hunched as if it had been hit.  When we walked to the site of the shot, my heart dropped when I saw bone--thinking--oh NO, another leg wound.  On closer inspection, the bone did not resemble a long bone.  So, I called Craig to bring Mossy as we could find no blood or the deer.  Mossy to the rescue.  She immediately picked up the trail--going in a direction in the woods I knew the deer did not go--but I allowed her to continue to track.  Glad I did because she had found Jason's deer very shortly. The deer was hit low in the brisket, but caused enough damage for the shot to be fatal.

So, Mossy's and my Thanksgiving weekend turned out perfect.  A young man with his first deer and Mossy finally finding her reward at the end of the track. Life does not get any better for a WHD than this.  She guarded this deer with her entire body, but allowed Jason to act like his was his for a few minutes.

*****
Mossy Brooke received another call this AM.  The hunter had shot the deer 3 hours previous, had found blood for 50 yards and then had lost the trail of blood.  He and his buddy had walked in the woods for 2 hours searching for the deer.  They then ran into another hunter up town who told them about Mossy. We arrived and after talking with the hunter found that the deer was quartering toward the hunter who had made an app. 150 yd shot with the deer going down on his front legs, then jumping up, crossing a fence, and running off. The hunter had gone down to the site the deer was standing when he shot and found blood.  He heard a crash about 75 yds to his left and assumed this was the deer.

Mossy started on the blood trail, went directly uphill and then to the right. The hunter advised me the deer did not go that way--he heard him crash to his left.   "When will she ever learn?"--were Mossy's thoughts at this point I am sure as I pulled her off the track and took her back to the area of the crashing noise. She appeased me for a few minutes and then we were off on Mossy's track again.

Within 100 yards, I began seeing large pools of gut shot blood, then thru a thicket losing my glasses, and across the creek.  Now, Mossy is pulling hard, I have lost my glasses and cannot see very well, and the hunter has gotten behind. I am calling him to catch up so he can be my eyes and shortly Mossy is standing over the dead deer.  Thank goodness the deer was dead as without glasses I did not see the deer until she was touching it. Three blows from the whistle and the hunter comes running to us. Mossy is awesome, awesome, awesome. And, I have learned that along with extra batteries, flashlites, etc., I will have an extra pair of glasses.  Another awesome morning with my little Mossy Brooke. 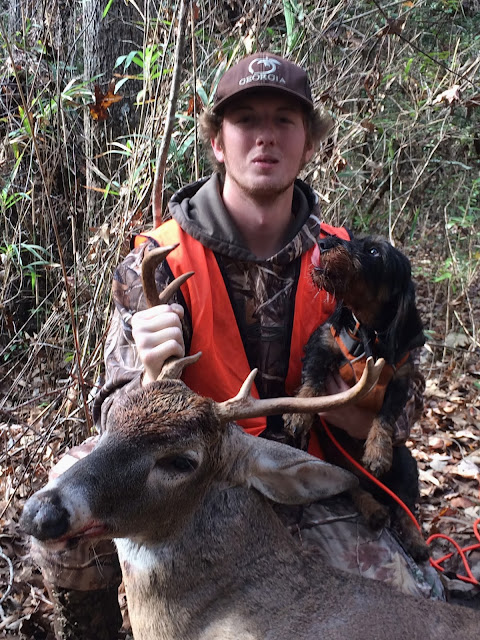 Posted by Jolanta Jeanneney at 9:51 AM