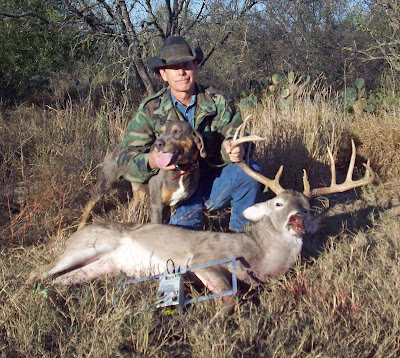 In Texas tracking wounded deer with dogs has different roots than in other parts of country. Most of the dogs that began to be used were all-purpose curdogs and cowdogs. The methods that were used to trail up cattle and hogs hiding in the mesquite or the canebreaks, could be applied to wounded deer as well. A cowdog could track and bay up a wounded buck with the same instincts and intelligence that made him a good cowdog. Catahoulas, black mouth curs and Lacy curs are involved in this kind of work today.
It was the Hindes family of Charlotte in South Texas who perfected the art of using cowdogs. Today Roy Hindes III and his son Cuatro work their famous “blue dogs” across the “Golden Triangle” of trophy buck country stretching from San Antonio down to the Mexican border. The big-racked bucks of Quality Deer Management on the South Texas ranches are highly valued, both in dollars and in respect and appreciation. Not many of these bucks are wasted as coyote feed. Roy's dogs are worked off leash. 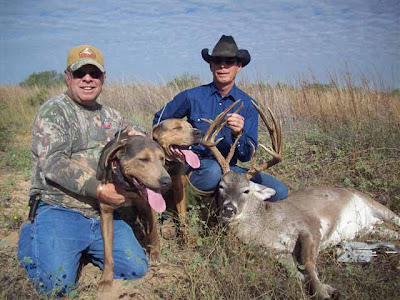 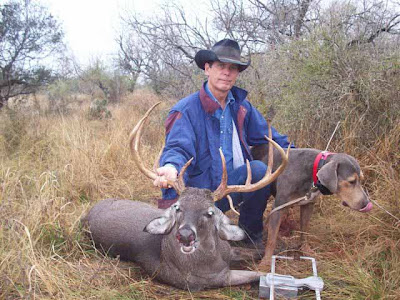 John asked Roy in one of his e-mails: "I'm curious about one thing. In the attached photo I see that you are still using the electronic tracking collar. Why do you prefer this over the new Garmin GPS Astro for dogs, which has a more compact receiver and is much easier to use?"

Roy's reply was : "I also have a Garmin Astro GPS system. But the Garmin system only reaches about .7 of a mile. This is just not far enough. Losing contact with my dogs is a scary scenario, especially when you are 100 miles from home, and on strange country. If that’s all I used I would lose contact with my dogs every week. Many wounded deer run several miles when found by a tracking dog, and I must maintain contact with the dogs at all times.

We sometimes use the Garmin system. But we only use it along with the Quicktrack system for a backup. My tracking system must be 100% reliable. The Quicktrack system, which I have used for over 10 years, is less complicated, reaches 4 or 5 miles anytime, and has never failed me-not even once. " 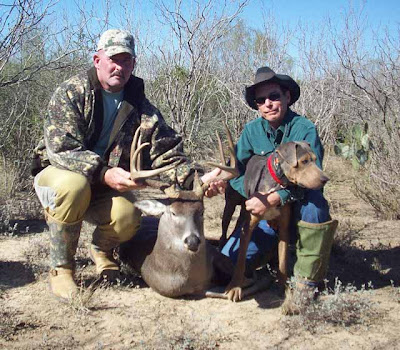 This deer (above) was shot in the top of the back. Shep trailed him 3 or 4 hundred yards and bayed him by himself till Roy slipped up there and shot him. Roy says: "Top of the back shots are typically real hard to catch. If this deer had ever run from me or the dog I'm sure we wouldn't have caught him. Shep will be 2 years old in March." 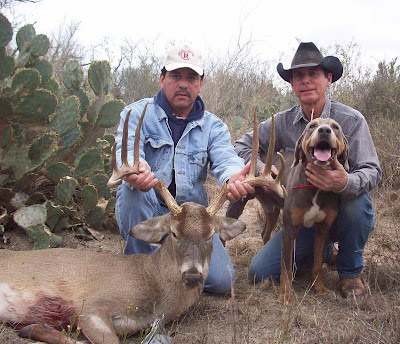 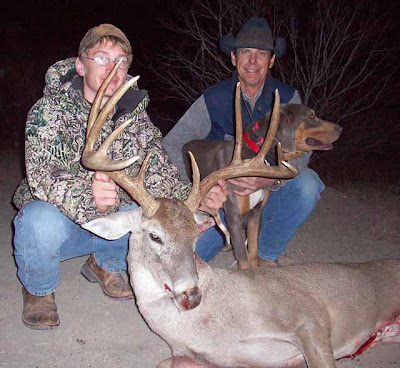 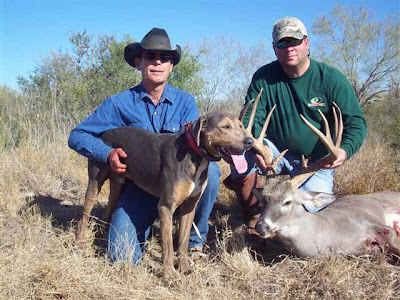 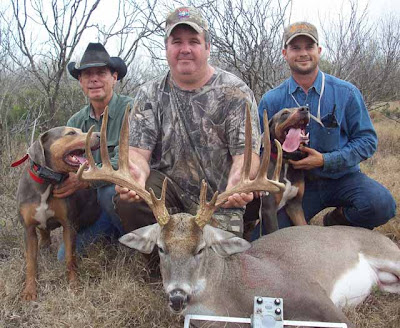 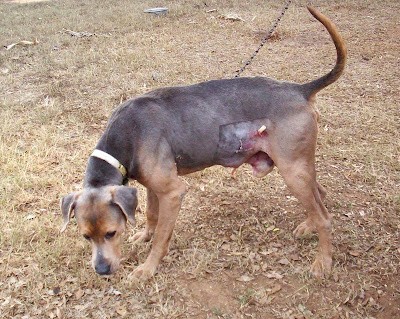 John,
Take a look at what one antler of a South Texas 12 point did to old Gus. He had five punctures down one side and a big hernia requiring two surgeries over a two week period. His vet bill for all of this has totaled over $1100. He is out of service as a wounded deer dog for the rest of the season, but he should recover fully. Using a leashed dog sometimes has it's advantages!
Roy
Posted by Jolanta Jeanneney at 10:28 PM

I just saw Roy on "The Bucks of Tacomate" show, and was glad to see him on your blog when I searched his name. He recovered a poorly hit buck on the show, and they also had quite a few comments on tracking wounded deer with dogs. All the hunters on the show agreed that it should be legal in all 50 states. They made good points about ethics and our responsbility to track wounded animals. Tracking with dogs was portrayed in a very positive manner.

Been hunting for close to 40 years in Texas. So happy to see an individual with the talent and dedication (this of course includes these incredible dogs) perfecting such a intinsically noble effort!

Exactly what breed of dogs are the ones that Roy Hindes uses to track these wounded deer?

It is the Hindes family's own strain of dogs. John's book has three pages on the history and development of Roy's dogs (written by Roy).

How can I get one of Roy's puppies? Is there a website, does he even sell these dogs

Sorry, I can't be of any help here. As far as I know there is no website. I don't know whether Roy sells puppies to the public or not.

Roy doesn't sell his puppies when he has litters. He keeps what he needs and gives his family the rest

Hands down they are the best dogs going. I've had the opportunity to be around these dogs and run with them for five years now. AMAZING CREATURES

In the attached photo I see that you are still using the electronic tracking collar. Why do you prefer this over the new Garmin GPS Astro for dogs, ... gpsdogtracker.blogspot.com

Might not remember me since I only belonged to the UBT my first year in the tracking service business.

Kind of had some thoughts of continuing my tracking season by seeing if you/husband know of anyone maybe in the southern states with longer deer seasons in need of a tracker? Archery season is wrapping up here in Wisconsin and only have received one call to track last year for rifle season. Of course I hardly receive any calls once we have snow.

Let me know if you might know of anybody. Yes, I would need room and board for Coco and myself. Just more of a wild thought since I enjoy tracking with my dog and I have the time where I could go to another area. Only thing I would be concerned about in the southern states if the Dachshund breed is used and built for the terrain. Guess I would be most concerned of snake bites resulting in the death of a dog.